The decoding of the human genome and advancements in scientists' abilities to manipulate the mouse genome have resulted in the generation of countless mouse models of human disease and tools to dissect the function of specific genes. It is expected that the numbers of genetically engineered mice carrying transgenes, targeted mutations, and chemically-induced mutations will only continue to increase.

The Genetically Modified Animal (GMA) Phenotyping Service exists to serve investigators at Memorial Sloan-Kettering Cancer Center, the Rockefeller University, and the Weill Medical College of Cornell University by providing an extensive baseline phenotypic profile of genetically engineered animals. Such a comprehensive baseline characterization will be invaluable to investigators unfamiliar with normal anatomy, histology, physiology and age- or strain-related background lesions of their research species. Evaluating the entire animal, as opposed to a specific tissue or organ system, will help to identify unanticipated phenotypic changes. 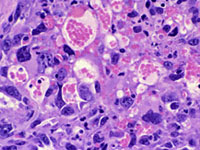 Complete histology services including tissue processing, paraffin embedding, cryostat services and staining with routine stains such as hematoxylin & eosin and special histochemical stains are available. Immunohistochemistry, immunofluorescence, and digital slide scanning are available also through the LCP. The GMA Phenotyping Service has an MX-20 Faxitron , which produces extremely high-resolution radiographs of small laboratory animals (mice and rats), as well as excised tissues and paraffin blocks. Specimens can be placed on adjustable shelves to obtain images magnified up to 5x.