When ophthalmologist Dr. John Pena was a first-year resident, he helped to treat a child with a form of cancer that originates in the back of the eye. Dr. Pena used advanced technology to see inside the eye’s clear, gel-like structure called the vitreous, and found abundant microscopic structures that transport biological information from one cell to another. The patient’s case inspired Dr. Pena, then a Weill Cornell Medicine physician-scientist, to develop new methods for visualizing these structures, or extracellular vesicles, in tissues, and explore their role in cancer. The work eventually led to a Cornell startup that focuses on developing new therapies for blinding eye diseases.

Laying the groundwork for the startup’s establishment was critical bridge-funding assistance from Weill Cornell Medicine’s Daedalus Fund for Innovation. The funding enabled Dr. Pena to further develop the procedure, which in 2019 he published in Nature Methods. Shortly afterward, Dr. Pena founded Aufbau Holdings, an early-stage ophthalmology biotech, for which he serves as CEO. Leaving academic medicine for industry was like “jumping out of a perfectly good airplane,” he said. But he was committed to translating the basic science advancement in imaging from the bench to the bedside in the commercial space.

“We have to scale our operations to bring the therapeutic inventions to clinic,” he said.

Dr. Pena and other Weill Cornell faculty and alumni recounted their entrepreneurial journeys at the sixth annual Symposium on Entrepreneurship and Academic Drug Development, hosted Nov. 14 in the Belfer Research Building and attended by more than 100 people in person and via Zoom. The symposium, sponsored by the Dean’s Office, showcased Weill Cornell’s rich array of programs for supporting faculty who want to bring their discoveries to the health care marketplace.

“Sometimes those of us in academia may be curious about starting a company or patenting a discovery, but may not be sure where to start,” said Dr. Augustine M.K. Choi, the Stephen and Suzanne Weiss Dean of Weill Cornell Medicine. “Attending events like this is an excellent way to learn about available resources. The Office of BioPharma Alliances, the Center for Technology Licensing, BioVenture eLab, and related programs such as the Daedalus Fund for Innovation have experts on staff who can provide important guidance every step of the way.” 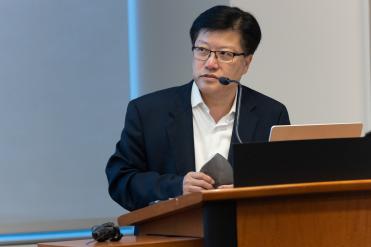 Dr. John Leonard, senior associate dean for innovation and initiatives, highlighted expansion in these offices, as well as new spinoffs, inventions, commercial alliances and licensing. He emphasized that Weill Cornell Medicine now manages all these efforts under one office—“one front door”—known as Enterprise Innovation.

“There's a lot happening, and it continues on a positive trajectory,” said Dr. Leonard, who is also interim chair of the Weill Department of Medicine and the Richard T. Silver Distinguished Professor of Hematology and Medical Oncology at Weill Cornell Medicine.

Dr. Lisa Placanica, senior managing director of CTL at Weill Cornell Medicine, led a panel discussion on the challenges and lessons of entrepreneurial life, with Dr. Pena and two current Weill Cornell Medicine faculty: gynecological surgeon Dr. Tamatha Fenster and pharmacologist Dr. Lonny Levin. Dr. Fenster, an assistant professor of clinical obstetrics and gynecology, is an inventor of imaging and surgical tools including a new type of speculum, and Dr. Levin, a professor of pharmacology, is developing a non-hormonal birth control pill for men.

Dr. Pena emphasized that would-be entrepreneurs at Weill Cornell Medicine should try, for as long as possible before founding a company, to collect data for their ideas inside the institutional community with all its supportive resources. “When you start a company, you’re always thinking about your money burn rate,” he said. Staying in as long as possible means “you’re not spending as much money when you come out.”

Dr. Fenster, who is also director of innovations and biotechnology of the Fibroid and Adenomyosis Center at Weill Cornell Medicine, noted that she enjoys the best of both worlds, as an innovator who still teaches residents and medical students and treats patients but can also call upon Weill Cornell Medicine’s ever-growing translational offices. “I use the resources here to the nth degree and I’m so grateful for them,” she said. “It’s amazing because I can think of an idea while I’m in the O.R., sketch it up and then call my dear friends at CTL, and within a day they start doing patent searches for me, and help me refine the drawings and the CAD models.” 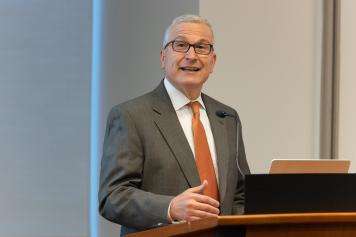 Dr. Levin noted that being able to work in both the academic and commercial settings is becoming ever easier, thanks to efforts like Weill Cornell Medicine’s. In the past two decades, “the line between academia and pharma has totally blurred,” he said. He explained how he and his colleague Dr. Jochen Buck were able to develop a contraceptive enzyme inhibitor with critical assistance from the Daedalus Fund for Innovation led by Larry Schlossman and the Tri-Institutional Therapeutics Discovery Institute, a partnership between Weill Cornell Medicine, The Rockefeller University and Memorial Sloan Kettering Cancer Center.

“That ability to take compounds from hits in a screen to drug candidates you can use in an animal model is unheard of in most academic settings, but we have that now,” Dr. Levin said.

The symposium’s keynote speaker was Dr. George Church, a professor of genetics at Harvard Medical School who is regarded as a founding father of genomics. Dr. Church gave the audience a tour d’horizon of his lab’s recent work, along the way showcasing many of the commercial and scientific possibilities of DNA technology: molecular transistors, fluorescent microscopy for DNA sequencing, organisms with non-standard nucleic acids and amino acids, multi-virus resistant bacteria for biotech production, non-Crispr DNA editing techniques, superfast-growing bacteria for biotech, techniques for writing information to DNA as a storage medium, ever-evolving DNA barcodes for tracing cells in organ development studies, and even aging reversal medicines.

Although many of these projects and ideas might seem too much of a reach, Dr. Church said, the future is closer than we think. He noted that recent mRNA and viral-vector COVID-19 vaccines were technologically equivalent to gene therapies, and yet became available at low cost around the world thanks to government support and global economies of scale. He looks forward to similar successes in other areas, and is most optimistic about gene therapies against aging. “The COVID-19 experience makes me more hopeful that we can get aging reversal for $2 a dose,” he said.

Many Weill Cornell Medicine physicians and scientists maintain relationships and collaborate with external organizations to foster scientific innovation and provide expert guidance. The institution makes these disclosures public to ensure transparency. For this information, see profiles for Drs. Tamatha Fenster and Lonny Levin.